Open data… is never really open. That is the unfortunate truth. Even if, at the outset, data is collected transparently for the common good, then there are societal, cultural and ultimately economic costs to having, holding, and using that information.

Shoshana Zuboff – who, in her own words, says “I have dedicated this part of my life to understanding and conceptualizing the transition to an information civilization” – is an author and scholar who paints a colourful picture when she talks about the impact of digitally transforming our world. The future is data-based (if not full of databases), and that may be a good thing.

But at what cost to society? To our culture, even? And, economically, what might we actually be at risk of losing, by trying to have all of this information to hand – and in particular, if it’s being collected under the heading of open data?

Ostensibly, open data is curated and used for the public good. Intrinsically, however, at some point in the collection chain, it generates a closed revenue-stream for a very small number of powerful aggregators. Zuboff refers to this as a side-effect – a behavioural future – made socially-acceptable by the fact that that data then, for example, underpins a vast range of public goods. Google’s data is a case in point: underpinning Gmail, Waymo, Google Translate and more.

We also have Google’s StreetView – which we may not think of or label overtly as ‘a surveillance tool’, but actually, that’s exactly what it is. A private company, capturing data about our lives.

CCTV and ANPR are also ubiquitous surveillance tools. And now, we have InLink too – a first-generation ‘Demolition Man’ surveillance engine that’s so bare-faced you hardly notice it. Sound, vision, height, gait, clothing, head-gear, pace, time, date, weather, age, sex, race … who knows what tools and algorithms are in there, or who it’s for.

Actually, anybody can start collecting data; anybody can survey anyone else, or anything. But who *is* watching, and who *is* setting the rules for those watchers – those are the questions we should be asking. Oversight, anyone?

Now, throw the notion of collecting information that will be labelled as open data into this mix – or don’t, because if we’re not careful, then this could be a baby-with-the-bathwater moment.

Platforms, by their nature, accumulate data, power, and wealth in an upwards direction. The very diversity and opportunity that open data activists promulgate is merely adding fuel to already near-bottomless resources, which makes it harder for start-ups, scale ups, disruptors and innovators to gain traction and contribute to economic diversity and strength. The best they can then hope for is to be acquired before the cash runs out.

Conversely, at the highest level, the state already has far-reaching surveillance powers. But it may not have the insight (or support) to deliver a similar set of deliverables. In an age of austerity, it almost definitely doesn’t have the appetite – and so the private state intercedes. At the next level down, local authorities are also conflicted: they’re trying to reduce maintenance costs, to free themselves from financial liabilities, and yet still deliver the public good.

That said, do the (patchy) open data releases on data.gov.uk amplify or empower the privatised surveillance state? Not really. Although the national LIDAR data sets are nice!

But wouldn’t those same private organisations (the Googles, the Facebooks, Ubers, Apples and Amazons of the world), wouldn’t they jump on the opportunity to start using detailed national data sets? Asset registers, land ownership, property and site level data, national topographic mapping etc.? Of course, they would – even though that would represent further accretion of the public good into private hands for the purpose of behavioural futures.

What seems almost unavoidable is that that transfer of (albeit licensed) public goods to private hands appears to most a benign panacea that they wouldn’t be without. However, as consumers’ views and understanding evolve, will they weigh their appetite for the actual and perceived benefits against the pay-offs and blind eyes inherent in a privately curated future? Acceptance of this path as an acceptable quid-pro-quo may be cognitive dissonance writ large but we should be careful what we wish for. It might be a high price to pay.

James Cutler is co-founder and CEO of emapsite. He also has the role of Vice-Chair of the AGI Council and serves on Ordnance Survey Partner Advisory Committee. 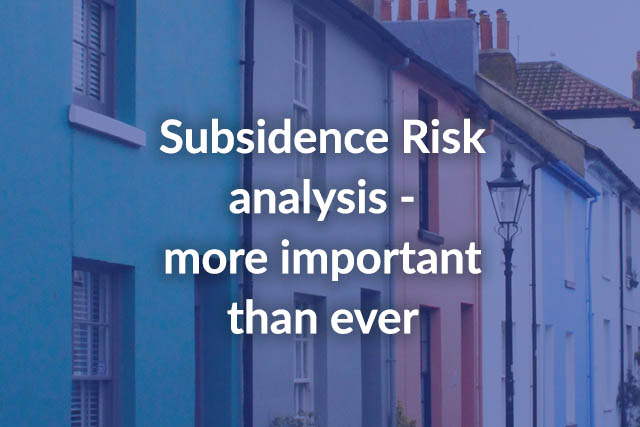 Many organisations are now looking at recent weather patterns to work out how subsidence might affect property owners over the longer term. We're asking, "why aren't more teams analysing subsidence risk right now?"